A line along which something is broken: BRUCHLINIE
The term is widely used in both geology and sociology. A fault line makes tensions visible, tensions in the earth such as the shifting of plates, and in sociology by the splitting of societies due to political or religious disagreements. This process is also present in the material ceramics due to temperature fluctuations, drying processes and different material thicknesses.

The new exhibition “Bruchlinie” shows artists with ceramic sculptures and installations. Although they all work with the same material, the approaches are completely different and the fault line shows itself as a distributor (or messenger)

It is the revealing of a tension (of which a fault line is the result) that the artists in this exhibition show in a number of different manners. 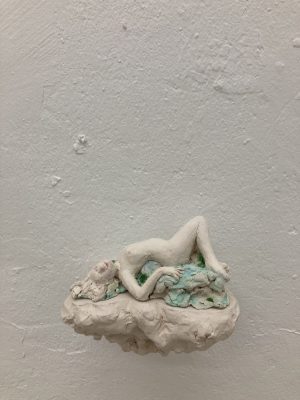 Caro Suerkemper’s work balances between vulnerability and abuse, power and powerlessness. It shows taboos in a way that seems fragile and innocent. In her work there seems to be a reference to art history, the form language is closely related to baroque although in concept she claims it isn‘t the most important aspect. Some of the inspiration came from the Plague Columns memorials of the plague period. It is a monument of survival that illustrates the victory over evil. The vertical erected monument stands for the hierarchy of good and bad, an aspect that is prominent in her work. The new work exhibited expresses similar circumstances. The lying figures are inspired by her time suffering of corona illness. But instead of overcoming and celebrating the victory over the illness, the body is liberated from control and stays in a horizontal position, devoted to cosmic power. 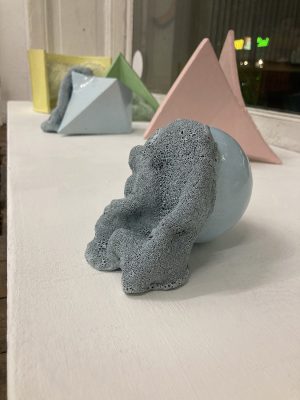 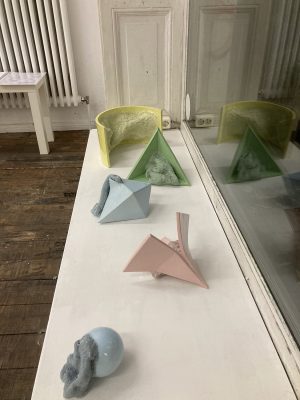 Catalina Niculescu ’s sculptures are closely connected with the forces of nature. She employs architectural forms and uses natural reactions and geological processes to disrupt the metaphysical and the ideal world of geometrical shapes and volumes. Notions of erosion, collapse and invasion inhabit the space within and around these solid structures creating a sense of emergency inside her architectural modules. 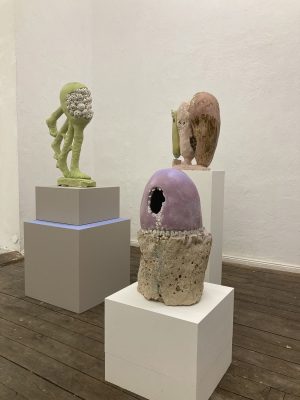 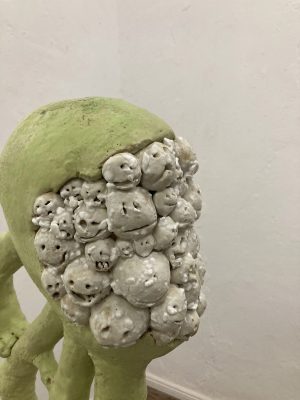 In the ceramic work of Dennis Feddersen we are confronted with partly figurative and moody creatures, that are morphed into each other. Many of the objects are pierced with holes and they look like staring eyes. You get a feeling of restlessness looking at the objects as if they are dealing with sub conscience struggles. The symbiotic bodies tend to work like a duality that is inescapable. 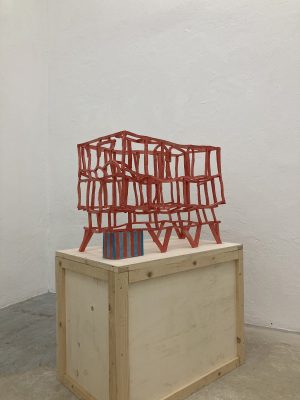 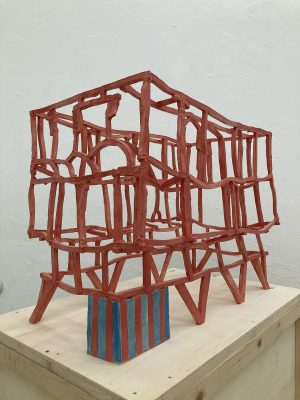 Dorothea Nold is interested in transformational processes of physical and social spaces, its connections, intersections and interdependencies. Since she experienced the Sichuan earthquake, the themes of altering structures, stability and fragility have informed her work. Through her sculptural interventions and its materialities, she pushes limits and boundaries, in order to question forms of convertibility. 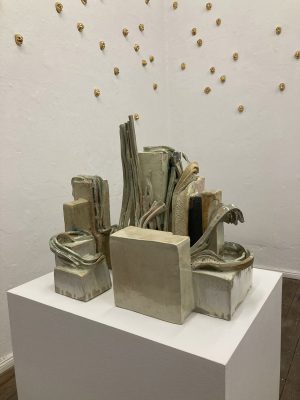 Isa Melsheimer investigates urban living spaces and the conditions for their design and change. She is as interested in the formal vocabulary of modern architecture as she is in urban scenarios and the dynamics of social tensions. Using often forgotten and neglected buildings, she recreates the characteristic forms from the vivid memory as well as from the studied aspects. In her ceramic work, she combines architectural structures with organic elements that could be a consequence of the ecological debates. 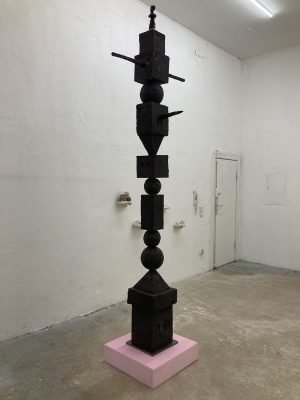 The works by Jeroen Cremers have a dystopian air about them. His artwork shows enlarged body parts and utensils, a kind of ‘wonderland’, as the artist calls it. A universe of strangers, abandoned objects reminiscent of remnants of ancient cultures or cartoonish worlds. Made with scavenged materials like paper and cardboard, his collages, paintings and installations show an absurd reality filled with twisted heads, pinocchion giants or giant hands and fingers. Recently Jeroen has been incorporating ceramics into his work again. He expanded his wonderland with bizare animalistic creatures, organic objects and weaponry. 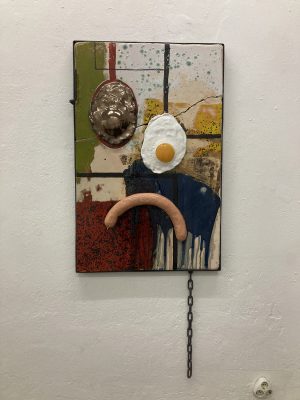 John Isaacs studied evolutionary biology and developed a taste for exploring and understanding the mysteries of human existence.
He uses a wide variety of materials and media that he uses to alienate and redefine values and meanings. 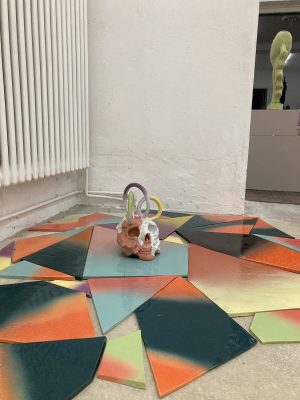 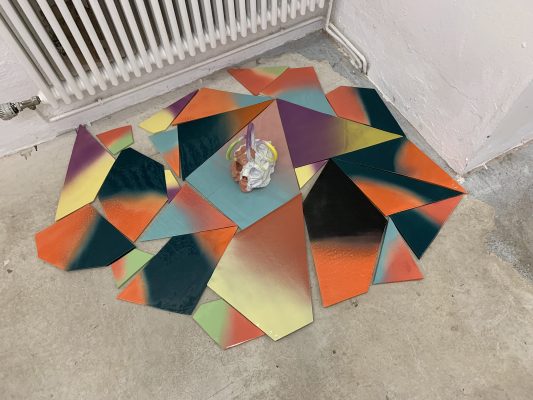 Myriam Mechita cooperates in her work with both a hypnotiser as a psychic to explore the past and a possible future. She is interested in the sub-conscience were reality and imagination mix and create personal images and memories. By going into a meditative state she explores her ‘dictionary” and translates this found information in objects drawings and installations. 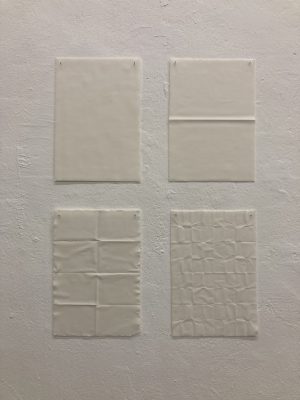 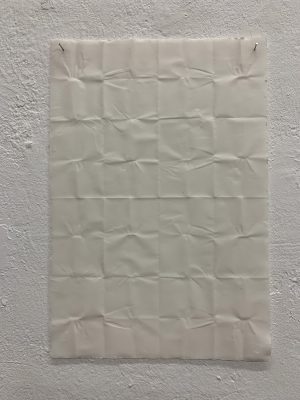 Maria Efstatiou has worked in a broad range of mediums, installation, projections, drawing, printmaking and ceramics. The main interest in Maria’s work involves traces and patterns in particular found on a tiny scale, like dust on the floor, spider webs and even paper folds. Signs of change that scratched surfaces, crumbling textures and broken patterns. Unwanted but inevitable changes. 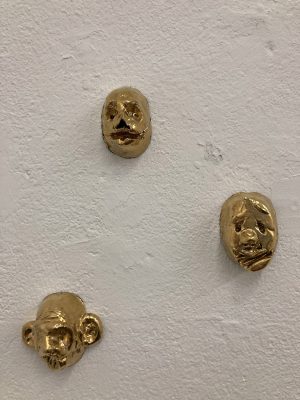 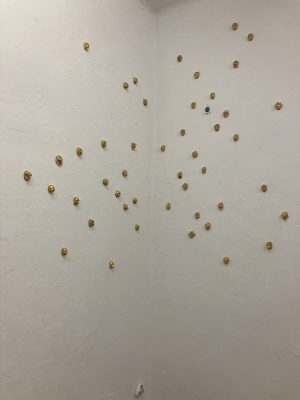 Sebastian Neeb covers a wide range of media; painting, installation and sculpture. His humorous and ironic way of working speaks about the mechanisms and strategies used in the manipulation of groups and individuals. They depict banal themes in order to comment on and to the sight of power.
According to Neeb, art is also the confrontation of a spectator with an object.