CARTOGRAPHER OF THE HEART Angela Kaisers’ work is a thorough map of the relief of love and the borders of interpersonal relationships. With scientific accuracy, Kaisers accumulates data and information about her most intimate feelings and builds diagrams and graphs which in turn form constellations and patterns. Kaisers is a cartographer of the heart – she reduces her emotions to a laconic abstraction in order to be brought back to life inside the viewers’ minds. In Dreams, 2007. Angela takes her observations a step further to the unconscious level: transcribing and interpreting her dreams. On the occasion of her solo exhibition at Kleiner Salon, opening April 9th, Kaisers answered some questions about her singular working method and the materials her dreams are made of. 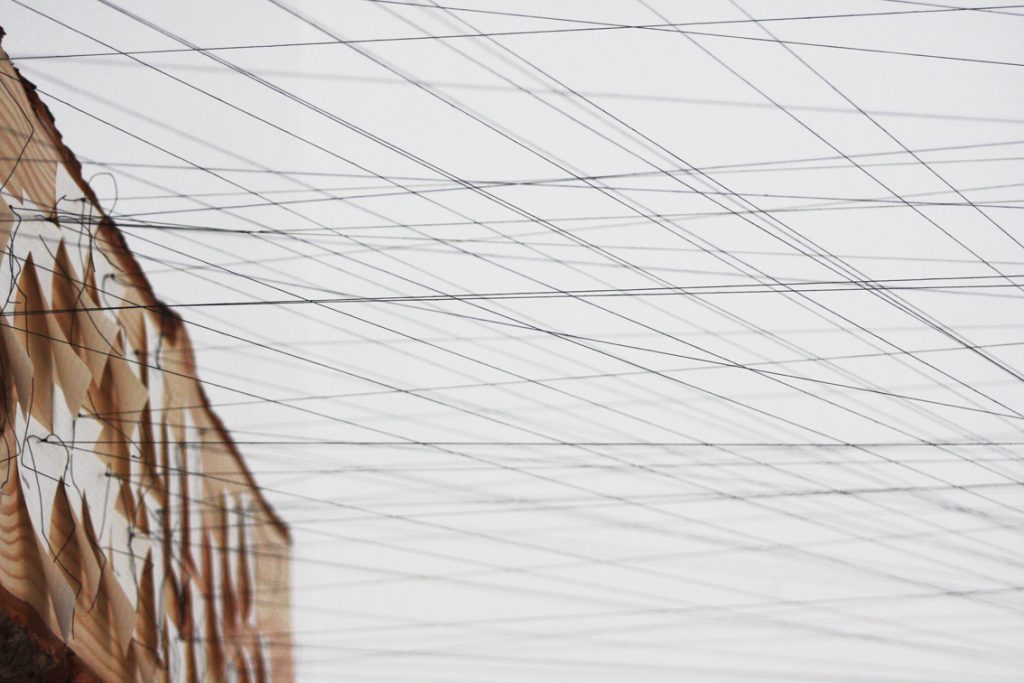 How did you come up with the idea to record your dreams? For quite a different project I had been researching fantasy worlds and had the idea to have a look at my dream worlds as I remembered having quite surrealistic dreams and dreamscapes when I was a teenager. Hence I started recording my dreams. After doing so for a couple of weeks I noticed that my dreamscapes had changed: instead of surrealistic storylines and sceneries my dreams seemed rather realistic. What did intrigue me though was the frequent recurrence of specific symbols and characters. My curiosity to see how often I would dream of actions like drinking, eating or riding in a car and of specific people like my boyfriend and ex-boyfriend led me to transcribe my dreams for an extended period of time – eventually for a whole year – and to look for explanations why I would dream of them.

During your studies you focused on photography. What led you to leave the 2 dimensional format behind and create spacial art installations? During my studies I created a fictitious alter ego – Christel Rosenberg. My first approach was to dress up as her and take self-portraits, which was followed by collecting objects to create a setting for these images. After letting myself experience her life for some time I saw that this is actually exactly what I want to offer to the viewer as well: an environment that enables them to take part in her life. I wanted them to be able to read in the books I collected for her, sit in the chair I bought for her and touch the clothes I had worn in order to become Christel.

In your work you analyze intangible elements, such as feelings and intimate experiences, through a rational measurement system (excel charts, etc.) Does this system help you understand your emotions? I am an emotionally driven person. But I am also interested in why and when I react in a certain way. Therefore yes, breaking down specific situations and feelings I am or have been confronted with certainly helps to sort and come to terms with them.

For this project, you recorded your dreams every night for a whole year. How often did nightmares come up? I marked 10 dreams as nightmares. There are several more dreams which feature war, battlefields and panic attacks which I did not record as nightmares though because they were not emotionally haunting me.

Why did it take you so long (8 years) from recording the dreams to creating the final installation at Kleiner Salon? Right after the year of recording my dreams I started going through them but realized pretty soon that I did not have the emotional distance to take a clear, more objective look at them – and my life, including my emotional life in that year. Which I believe is a necessity to analyze and interpret my dreams. 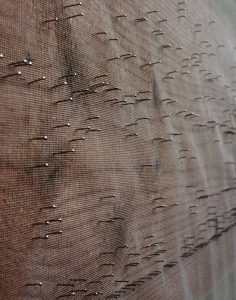 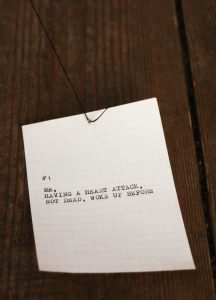 There are many systems for dream interpretation. How did you approach your dreams? I believe the most important step in interpreting your dreams is to be honest to yourself about your (emotional) life then and in the past. This will already help you to find clues about the meanings behind your dreams, recurring symbols and characters. With these ideas in mind I would use cultural and psychological approaches to learn more about specific symbols and their interpretation.

The materials you use seem very carefully chosen. What role do they play in your work? The material and method I choose to create my works support the idea behind my concepts and give the finishing touch to the feeling I want to generate with my works. They also supply the subject matter with a visual and haptic layer which creates an additional experience for the contemplator.

Do you see Dreams, 2007. as a self-portrait? I would describe it as a work that envelopes a part of my life – and this means it does not only focus on myself but also on the people around me and their impact on my (emotional) life. By providing an analytical insight into my emotional environment it does also offer one possible portrait of my life back then. Additionally, I see Dreams, 2007. as a tool to stimulate the viewer to reflect on their dreams in relation to their lives, their emotional state of mind.