Continuing the tradition of screening short and mid-length movies, this April in BcmA we are hosting a screening of The Cow Farm by young Syrian director Ali Sheikh Khudr.

The Cow Farm is an intimate story about Hassan, 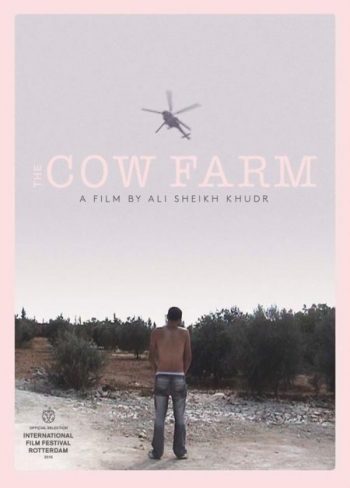 unmarried villager who lives alone and runs a cow farm in an outskirt of a small Syrian town. The film quickly reveals his strange, at moments romantic and bizarre, and above all very intense bond with his cows. Rather than as a source of income, Hassan regards them as his companions, objects of deepest dedication and care.
By following Hassan’s daily routine, we learn about his relationships with family and community, as well as his attitudes towards government and the political situation amid the Syrian uprising revolution. Rather than making a singular statement, the diffuse political insights allow better understanding of Hassan’s peculiar personality and action.

Premiered at International Film Festival Rotterdam in 2016, The Cow Farm had numerous screenings around the world. This will be its first public screening in Berlin. Director will be present for the Q&A session.

Ali Sheikh Khudr was born in Damascus, Syria. After working on numerous projects as an editor and cameraman, Ali started his career as a director with a short fiction film “Meal” in 2008, followed by short documentary “City Of Emptiness”, and a short fiction film in 2009 “Room Number Zero”. “The Cow Farm” 2016 is his first mid-length documentary. Ali lives and works in Berlin.